MisterFuzzyB is only one person who makes music which sounds like a lot of people. Here you can read an interview with him in October-2021

Please tell me a little bit history of the group?
-It’s a long long story… I played ten years in a cover band of the RHCP but my aim was to write our own songs  in parallel under the name of Femme Fatale which released a great album in 2010 .

But ten years with more than 1000 gigs in Europe was a huge thing and it was also bad for our relationship. So in 2013 I quit the band with the desire to go solo and to play all the instruments and sing. It took me four years to find my voice with intensive singing lessons, and in 2017, I recorded my first album “Chapter One”.  It  was released in numeric format for the French label XPlose Music, and in CD in 2018.

Please tell me a little about every member in the group right now, age, family, work, interests and something bad about everyone? Earlier bands? Other bands on the side?
-This is just me! I do everything by myself (Guitars, Bass, Keys, Drum programming, Vocals and Backgrounds Vocals) and I recorded it by myself too, doing the mix and mastering! It’s 100% MisterFuzzyB DNA!
Obviously I had to hire a band for the tour of the first album, a power trio with two girls on bass and drums. But for the “Pain & Euphoria” tour I want the best musicians in town ‘cos there are so many background vocals so they must be good singers too.

I can hear much different influences and I mention bands like Nirvana, Blur, Oasis, Franz Ferdinand in -my review ? Favorites from the past?
It’s weird ‘cos I’ve never been a Nirvana and Oasis fan, but for Blur yeah gotcha! It’s true I’m a huge fan of the band and of the solo career of Graham Coxon too, and yes I like Franz Ferdinand.

MisterFuzzyB  are you satisfied with the name?  How did it came up?  What does it mean? You weren’t afraid that some other band would be named like this? Which is the best bandname you know?
-It came out when I was on the road with my RHCP cover band, the singer often introduced me to the audience as Mister B from my real first name Bruno, and later, as I’m fond of the Fuzz Pedal effect and the meaning of a fuzzy personality, I stuck it all together. So here I am, Bruno Dumarais under the MisterFuzzyB stage name.

What´s the best thing with playing live? Have you done any since the covid came?
-For me it’s a sexual healing like Marvin Gaye sang it, I like to sweat during a performance and smell the sweating of the audience! I didn’t give any show since Covid ‘cos I was in my Studio recording “Pain& Euphoria”.

And where is it best to play? And the worst place?
-Belgium! The audience is always incredible there! The worst place is touring in bars in France, my country, I don’t want to do this anymore. People are more concerned about their drinks, and sometimes not very present for the band…

How is to play this sort of music in France right now?  Which types of bands do you have concerts together with?
-It’s difficult because France is not a rock country, I’ll have to look abroad like Sweden with a huge Rock and Metal audience!

How would you describe your music in three words?
-Er… it’s a tricky question ‘cos my first album was a strange mix of Dark Rock and Funk, and the new one is definitely Power Pop Rock, more commercial.

What does punk mean to you, is it only a word or is it a lifestyle? I know you don´t play punk but you have surely an opinion about it?
-A way of life for sure! By the way, I’m a punk rocker, the truth is I lost my driver’s licence last month. I fell asleep driving and hit a sidewalk in front of a police car…

Which song/album or group was it that took you into music and you decided to play yourself?
-I was already playing the guitar but, when I saw The Jimi Hendrix Experience at Monterey, things became serious…

What shall a young guy do today to shock their parents as the way we did when we were young? They have already seen everything ;-)?   -It’s a very different generation… I mean for them everything is played out on the web and phone apps like Instagram and TikTok, so I think it’s not an angry generation and they don’t feel like messing around with the grown-ups.

How is it to live in France right now? Politically? Fascists?    -France is a great country for the quality of life and health insurance, but for Rock Music it’s not the place to be, definitely. I’m allergic to politics so I can’t say anything about it, and we don’t have a lot of Fascim issues…

Is there any good bands from France right now?  Is the punkscene/metalscene/hardcorescene/indiescene big? How is it in your hometown?  -Yeah for sure , there are thousands of bands who all try to get successful abroad ‘cos as I said there is a huge lack of Records Labels and Booking Agents for these kinds of music scene in this country and it’s always been like this unfortunately…

What do you know about Sweden?  Have you been here sometime? What is typical Swedish?  -I know you are lucky ‘cos, unlike France, it’s a very Rock and Metal country, so I’d like to find a Booking Agent to tour here, and in Finland, Norway and Denmark too! All Scandinavian countries by the way. To me, Sweden means tolerance and respect for nature, but also skiing! I’m crazy about cross-country skiing! I used to practice a lot as a kid.

Have you heard any good bands from Sweden?  -Oh yeah it’s where Yngwie Malmsteen was born and even if I can find him a little annoying sometimes, he remains an incredible Guitar player. The Hives are terrific on stage! In fact I’m a huge fan of Hanoï Rocks, an old Finnish band, and I also love the solo career of their singer Michael Monroe.

Your lyrics, who does them and what influences you? Never in french? -I’m only able to write on what I live and in English ‘cos it’s my culture and I think the French language sounds awful.

Please tell me about the lyrics a little on following songs

Blind -It’s a cover of my favorite Guitar Player, friend and Guitar Hero Stevie Salas, he suggested to me that I could cover one of his older songs so I said: why not? But I did it in a very different way! You hardly recognize the original.

I don´t care It’s a Punk one saying let me do what I want to do, and live as I want to live or fuck yourself!

Psychedelic resort This one is particular. In the middle of the writing of “Pain & Euphoria”, I had a writer block and I was terrified and fell in deep depression, so I went to a psychiatric hospital for one month and they helped me with my fears and blockages very efficiently. Then I came back to my Studio ready steady! So I chose to write a funny song out of a sad story. 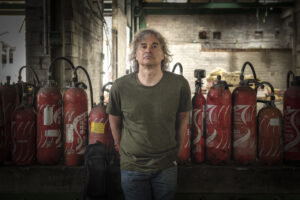 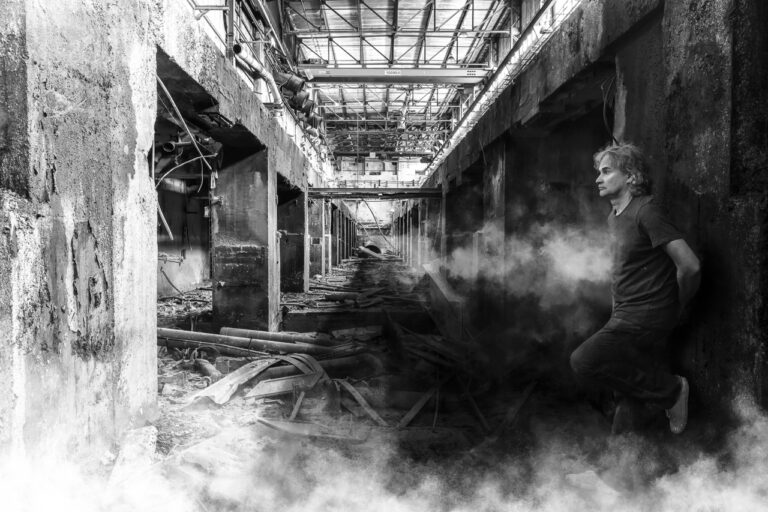 Do you think that music (lyrics and so on) can change anyones life, I mean people who listens to music?  Do you have any examples on that?
-Yeah definitely with teenagers, they are like a sponge. Sorry I don’t have an example in mind.

Your favorite record cover alltime?  Who does your record covers?  And do you have any good record stores in your hometown? Do you buy a lot of records yourself?
-All the Led Zeppelin covers by Dread Zeppelin! My record covers are made by my cousin’s husband, his name is François Bégnez and he is a very talented graphic designer.

Is it important to get out physical records of your stuff? Why or why not? Vinyl, CD, cassette, what would you prefer if you could choose whatever ?
-Yeah for sure! People need an object to manipulate and watch, lyrics to read. I’m fond of Vinyls and their comeback makes me happy.

Please tell me a funny thing which have happened during your career and under some gig? With this band or with some earlier band you have been to?
-With Femme Fatale I climbed on bar counters completely naked with my Guitar and chose stage diving to come back on stage. You cannot imagine how many times my private parts were touched. Oh my… Won’t forget it…

How does your audience look like? Which people do you miss on your concerts? Ages? Which is the biggest band you ever have played together with?
-My audience are fans of good rock music. I miss my most excited and crazy fans, always here to support me! All ages are there, from teenagers to people in their sixties. I did the opening of “Kill The Young” when I played in a band named “Kiss Me”. A good memory.

Please rank your five favorite records, five favorite concerts and five most important things in life?
-Records: Are You Experienced? By The Jimi Hendrix Experience/ THe Reality of my Surrondings by Fishbone/ When The pawn by Fiona Apple/ Mothers Milk by the RHCP and Shadows Collide with People by John Frusciante but I could give you a different roster everyday.

Concerts: Fishbone on My Surroundings Tour / King´s X on Live in London promotion tour / Stevie Salas ” Live at the music academy International / Screamin Jay Hawkins-Live in JP and Aerosmith each time I saw them! It´s hard choice, there are so many records and concerts that mean a lot to me…I can´t help it, let me mention Hawksley Workman and his awesome (Last Night we were) The Delicious Wolves.

Things in life: Love, my wife, my daughter, music and good cooking.

First, last and most expensive record ever bought? The most embarrasing record in your collection?

The most embarrasing: My Mariachis CD´s collection!!!

-No, I really appreciate interviews and it´s not too much. I prefer live interviews it´s more interactive.

Do you care about reviews? Which is the most peculiar you ever had, with this band or any other band you have been to? Have you ever changed anything after a bad review?

-Yeah of course! The most peculiar was by a webzine with a young girl making a lot of spelling mistakes. It was with Femme Fatale and I´m lucky enough I´ve never had bad reviews.

-People compare a lot and sometimes it´s weird. However it´s always interesting to try and understand reasons. You can learn from it.

If you could choose five bands from the past and the history and nowadays and both dead and living bands to have a concert with your band. Which have have you been chosen?

Is music a good way to get out frustration and become a nicer person outside the music?

-Yeah for sure! Music is soothing, even if sometimes it obsesses me…

Which is the most odd question you ever have got in an interview?(Except this one)

-Nothing in my mind…

Which is the question you want to have but you never get. Please ask it answer it?

-Do you take special care of your lyrics? Yes they are as important as the music for me

Future plans for the band?

Take care of my little family.

-I hope “Pain & Euphoria” will be succesful in Sweden!

Beerfavoritesort? If you take a beer which have it been then?

-Well..I´ve been sober since July ´cos I´ve had too many problems in my life with alcohol addiction. The last song of my new record is called “Sobriety”. But when I still was drinking, my favorite beer was “The Chouffe”, a very strong Belgian beer.